Walking past and on the memorial: participant observation

In front of the Stopera, hidden in the pavement, you can find a memorial dedicated to the Jewish orphanage 'Megádle Jethomim'. The orphanage was invaded by Nazi Germany in 1943, upon which all boys living there became victim of the Holocaust. While modest in nature, the memorial seems to lack attention as people simply walk past it. Waterlooplein - formerly Vlooienburg - is a busy area in the centre of Amsterdam, and the adjacent Stopera cannot be overlooked. But what about the remnants of this past the memorial is so desperately trying to preserve? Through the process of placemaking, we have sought ways of giving the memorial its much-deserved recognition, while maintaining its humble character.

We used the five steps of Design Thinking as a framework for conducting our research: (1) Emphatise, (2) Define, (3) Ideate, (4) Prototype, and (5) Test. Within this framework, we developed the following research questions which we adopted as our points of departure: What are the consequences of memorialising a place or event through a ground-based memorial? And how can the Megádle Jethomim memorial become more effective in reaching the public? On this webpage, the outcomes of the five phases are presented, ending with our final advice on how to move forward with this memorial.

Client: Stadscuratorium
The Stadscuratorium advises the Municipal Executive on art in the public space.The advise that they provide can be both solicited and unsolicited, exploring new forms of commissioning, financing and conservation. Through this, Stadscuratorium acts as a booster, by actively creating connections with and between artists, the municipality and cultural institutions.

Within the Portuguese-Israelite community in Amsterdam, the first organisation to look after orphans was founded in 1647, under the name Abi Jethomim. This organisation was for boys only. Following this, an orphanage was established in 1738, which was called Megádle Jethomim (‘upbringing of orphans’). Initially, this place looked after education, health care and assistance in seeking jobs. However, during the eighteenth and nineteenth century the care for orphans was expanded due to higher demands.

In 1836, Megádle Jethomim moved to a new building in Amsterdam, at the Zwanenburgerstraat P 184. The place was officially opened on 17 January 1836, under the direction of Simon Mozes de Boer. The building was designed to provide a home for some twenty-three orphans. Eventually, the place had too little room to house everyone, resulting in a second move on 1 May 1865. The new orphanage was now located on Amstel 21-22 (at the corner of the Zwanenburgerstraat), where it would stay until the German invasion in 1943. In 1925, the orphanage housed 75 boys. They could join the orphanage between the ages five and ten, and one could stay there until aged fifteen. This changed in 1763, allowing children to stay until they turned eighteen. Additionally, the orphanage supported children still with their families, who had financial troubles.

In 1937, there were 66 children living at Megádle Jethomim. During the Second World War this increased to some 100. Many of those joining were refugees from Germany. On 10 February 1943, the orphanage was entered by the Germans and all of the children, together with three caretakers who decided to accompany the boys, were deported to Sobibor. 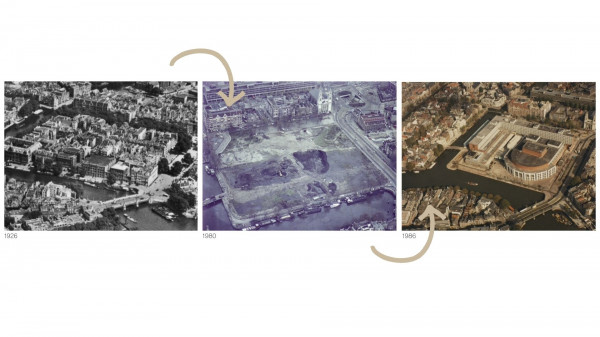 What is now known as Waterlooplein used to be a neighbourhood called Vlooienburg, the heart of Jewish life in Amsterdam. Around 1600, the Vlooienburg was created near the Amstel, consisting of only three streets: Lange Houtstraat, Korte Houtstraat, and Zwanenburgerstraat. As described by the municipality of Amsterdam, there were a few thousands of people living there, generally speaking in poor conditions. In 1882, the neighbourhood was transformed into Waterlooplein. Because of the high concentration of Jewish people living there, it eventually became an easy target of Nazi troops in the 1940s. People were deported in large groups, soon leaving the area empty. Whereas first almost 80,000 Jewish people were living there, after the War this number was reduced to a scarce 10,000. Eventually, the Jewish neighbourhood was remodelled by the municipality, which resulted in the demolishment of most of the original houses and buildings- including the Megádle Jethomim orphanage.

Otto Treumann was a graphic designer born 1919 in Fürth, Germany. Due to him being from a liberal Jewish family, he had to flee the country in 1935 from the Nazis and landed in Amsterdam, where he started to study graphic design Amsterdamse Grafische School. While in hiding, he spent mush time creating illegal printings of fraudulent identity cards and coupons. Treumann is mostly known for his work as a graphic designer, with grand projects together with Bond van Nederlandse Architecten, Rayon Revue, memorial stamps for the Dutch postal service and much more. He is also known for his contribution of Holocaust memorials, and was specifically asked to design the memorial of Megádle Jethomim by Joods Maatchapplijk Werk, who commissioned the memorial in mid 1980s. Treumann passed away in 2001, and mush of his work and private collections can now be found at the Allard Pierson archive. 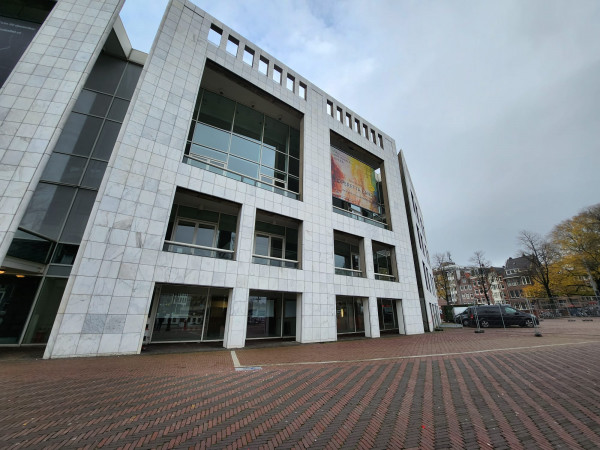 We define the memorial of Megádle Jethomim to be a ground-based memorial, meaning that the memorial is not only on the ground, but displayed on ground level, making it intertwined with the pavement that you may walk upon everyday. Ground-based memorials are not uncommonly used, and can be found around the city of Amsterdam, from Dam Square to the Livestock market, and are a way to memorate the people that walked on that same ground years ago. However, when visiting the memorial of Megádle Jethomim, one quickly sees how it being part of the pavement makes it difficult for people to notice the memorial at all. 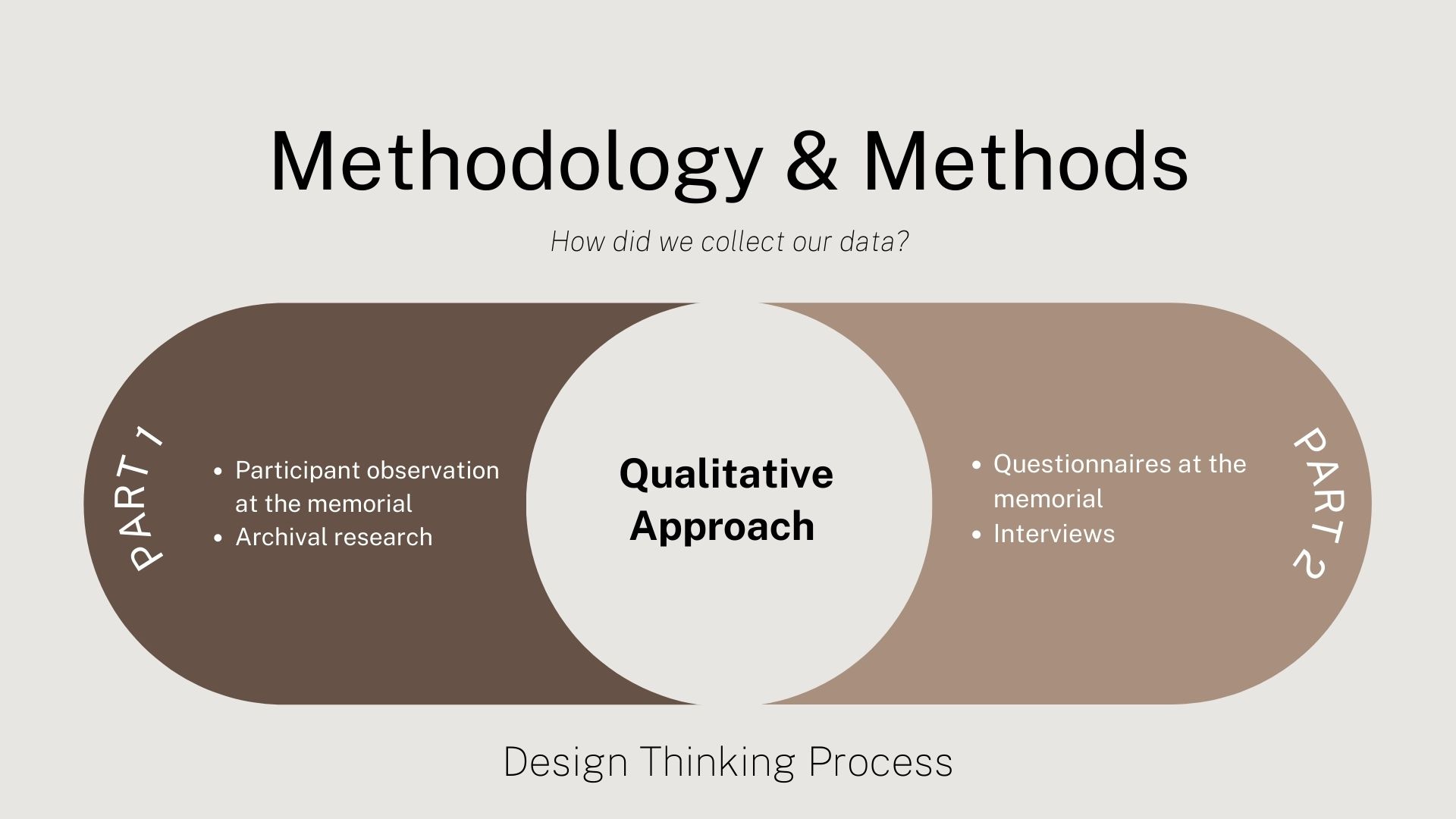 During the design thinking project, the Ideate phase proved important for the development of our potential prototype.

We hope that creating the opportunity of placing pebbles at the memorial, according to Jewish tradition, will increase interaction between the place and the Jewish community of Amsterdam. Through that interaction, we believe more people will start noticing the memorial is there.

The second prototype concerns an information booklet, which should contain a cohesive source of information on the memorial. As part of the last Design Thinking Phase – Testing – we held conversations with others to explore what the content of such a booklet should be. 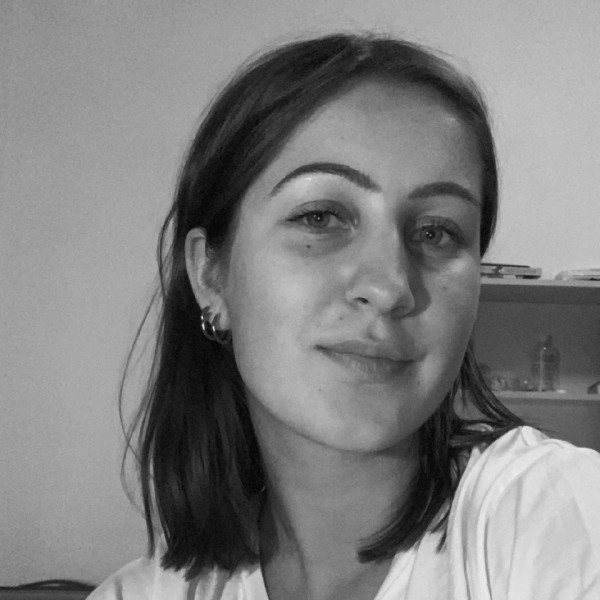 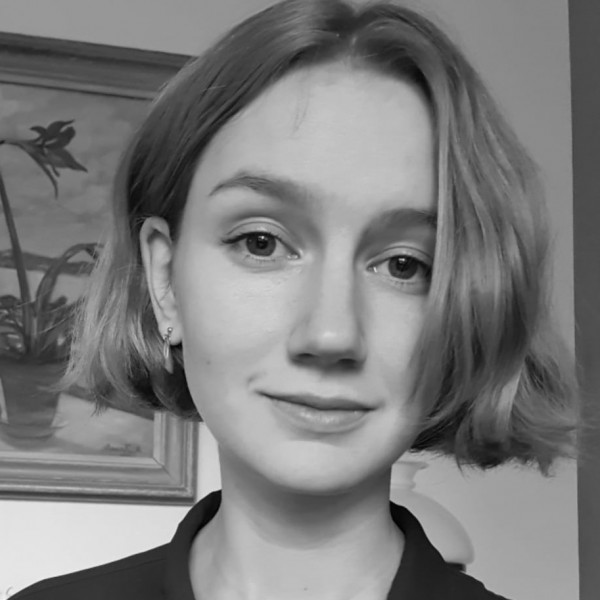 Firstly, we would like to thank Annemarie de Wildt, as part of the Stadscuratorium, who provided us with this project. Giving the memorial more attention in Amsterdam's city center started with Annemarie making it part of the agenda of our university course Placemaking for Conservation (UvA). In turn, Placemaking for Conservation quickly became Placemaking History, in which many parties became involved. Secondly, we would like to thank the Otto Treumann Archive as part of the Allard Pierson for opening their resources to us and giving us new leads in gaining a thorough understanding of the memorial, its design by Treumann, and its history situated in the larger neighbourhood of Waterlooplein. Additionally, the information centre at the Jewish Museum were increadibly helpful in making us knowledgable on their archive. Thirdly, someone who cannot go unmentioned is Arjan Muggen, representative of the municipality of Amsterdam. They were able to shed new lights on our project by providing is with new information from a perspective we had not yet unveiled. Finally, we would not have reached the final product in the form of two prototypes without the input of both our fellow students, as well as all the participants willing to share their opinions and perspectives with us.
Barber in a Box