Ceramic of Josje Smit at the University Library 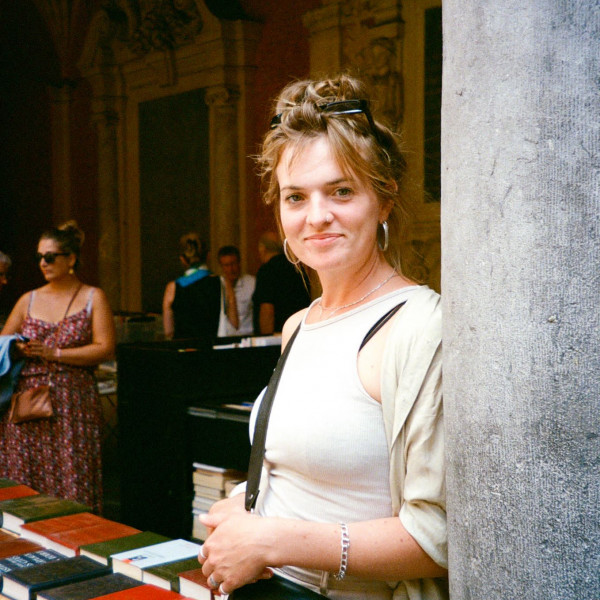 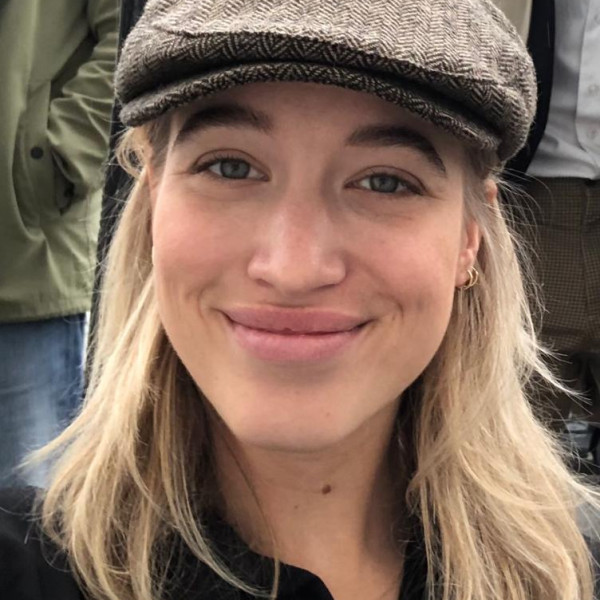 The ceramic of Josje Smit (1926-2003) in the entrance hall of the university library is a large sculpture mounted to the wall opposite of the entrance. One would expect the artwork to be the first thing visitors of the library will notice while entering the building.

“It is one of the first things you'll see while entering the hall of the University Library at Singel 425: a large relief in blue, green and white ceramic, although your view is disturbed by practicalities as a row of bins and a dispenser,” as stated by our client Reinder Lanjouw. The original research question was formulated as follows: “How to put this object on the agenda in the light of the future move of the Ub and possible sale of the building?”.

Soon we discovered the artwork will stay in place, at least in the near future. Therefore we redefined the research question: "How can we improve visibility/awareness of the object as an important element of the entrance hall of the future UvA faculty?"

We will approach the case by the five steps of the Design Thinking Method: 1. Emphasize; 2. Define; 3. Ideate; 4. Prototype; 5. Test. By these steps we hope to get the ceramic sculpture in the entrance hall on the agenda of the involved parties so the artwork will get renewed attention with the purpose to conserve it for the future.

Infographic on the proces

Situations around the artwork

The photo's below show the different situations.The practicalities placed in front and aside of the artwork affect its visibility. 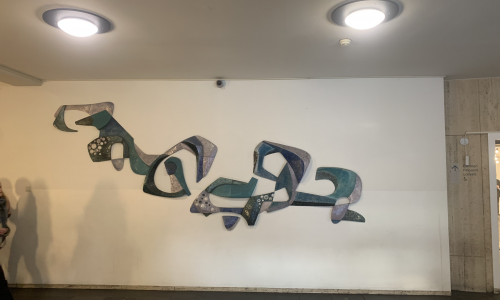 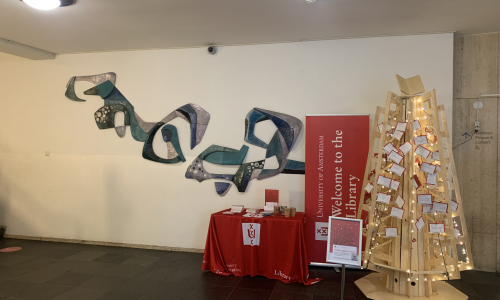 To get the artwork on the agenda and improve its visibility we first did some research on the artist Josje Smit, the artwork and the architecture of the University Library in which the work is placed. Below we present our findings divided in: ' About Josje Smit (1923-2003)' and 'Post-war architecture and wall art'.

Also we arranged an intervention to get the artwork on the agenda. By re-opening the artwork on December 12th (2022) at 9am, we hope to generate awareness about the artwork and the meaning and importance of it in the building. The audience of our event exists from our client, a restorer, two placemaking supervisors, one head of collections of Allard Pierson, the head of campus services of the Ub and all others who happen to pass by. We'll film this event and finally will present this footage to our colleague placemakers at the closing evening of the course 'Placemaking for Conservation'.

Josje Smit (1926 Amsterdam - 2003 Amsterdam) was a Dutch visual artist.
She had her studio and home on the Oudezijds Voorburgwal 57, a canal house also known as 'de Gecroonde Raep'. Initially, Smit wanted to become an actress, but after playing in a number of commercials, she decided that acting was not her passion. In her own words, the artist was looking for “something in the creative sphere”, but did not know exactly what that could be. According to Smit, the Dutch sculptor Cephas Stauthamer (1899-1983) gave her a “push” in the right direction and was her greatest source of inspiration. Stauthamer was a glass painter, monumental artist, sculptor and teacher at the Rijksakademie van Beeldende Kunsten in Amsterdam, where he himself once attended an art course between 1929 and 1934.

Smit did not go to the art academy, but instead took sculpture classes from Stauthamer, whom she later married. She started making ceramic pots and later also making ceramic wall decorations. Smit also made hand-shaped vases, mosaics, screen prints and tapestries in figurative and later on more abstract forms. Smit is generally described as “a girl with a creative urge”. When creating her works of art, Smit did not use a single method, but was always eager to experiment with different techniques. Her eagerness to work, yet modest attitude was recognized and rewarded. The artist earned her living making art; a special achievement for a woman at that period of time. For Smit, not the money, but the work of art itself was the greatest reward; making people happy. Smit worked with clients at home and abroad and exhibited several times. Among other projects, she made a rug for the Dutch embassy in Washington and she also sent creations to Aruba and Paramaribo. Many of her works are situated in schools, hospitals and in public spaces/buildings.

In 1966, the Dutch (new-build) city architect Jan Leupen (1901 – 1985) commissioned Smit to make a wall sculpture for the University Library at Singel 425, Amsterdam. The assignment was to create something rhythmic on the large wall in the hall. Smit made ten different designs, but Leupen was not yet satisfied. At the eleventh attempt, the artist received his approval. Smit tried to use the sculpture to represent a certain movement through the building. She says: “the sculpture invites you to enter and then to climb the stairs.” Smit made the ceramic shapes and glazes in her own ovens at her studio.

The work of art was placed in the university library in 1967, which was then used by the university. The then librarian, Herman de La Fontaine Verwey (1903-1989) wrote an article for the magazine Amstelodamum about the new construction of the library and also briefly addressed Smit's newly placed artwork. Verwey wrote about the visitor experience: “When entering the hall, the visitor's attention will be captivated by a polychrome ceramic sculpture by the artist Josje Smit, which indicates that the spirit strives upwards or, more concretely, that one climbs the stairs must consult the catalog and study rooms.” The ceramic sculpture has been part of library’s entrance hall for 55 years now. So far, technical documentation about the artwork is missing. Therefore we have asked retorer Janneke Escher, who is specialized in ceramics, to come up with a technical report. This is to be continued.

The reconstruction period (1940-1965) is the period in which large-scale construction took place to repair war damage. The goal was, among other things, to solve the housing shortage. In addition to housing, many government buildings were built, such as schools, universities, hospitals, sports complexes, etc. Many of the buildings from this time have a characteristic architectural style: functional with industrial techniques. This resulted in a sober architectural style, in which the current University Library is also built.

The University Library at Singel 425 was designed in 1966 by city architect Jan Leupen, his last project before he retired. This new building was an addition to the already involved buildings at number 421 (since 1881, in the old Handboogdoelen) and number 423 (the militia house, occupied in 1940). As the library’s collection grew, an expansion became necessary and the vacant lot at number 425 was the designated area for the library’s new building. This site was the former site of the ‘Voetboogdoelen’ and from 1820-1939 the Catharinakerk stood here. The new construction of the University Library went hand in hand with the renovation of the existing buildings. The wide building of the new one has a facade clad in white travertine. Because the UvA was still a municipal institution at the time, the new building was developed by Public Works. This means that the work was most likely part of the 1% ruling. This arrangement is briefly explained below.

The reconstruction period is characterized by an intimate collaboration between architecture and art. Art was often included in the design phase right from the start and thus formed an integral part of the building. The art is often located in a prominent place in the building, such as the facade or central entrance hall. We speak of 'bound' art when it comes to these monumental works that have been created in synthesis with architecture. This art form is distinguished by the great diversity of techniques: mosaics, glass-in-concrete windows, reliefs and (wall) tapestries.
The building and work of Josje Smit in the University Library Singel 425 is a good example of this. Sculptures by Hildo Krop have been placed on the facade - at the height of the third floor - and in the entrance hall the ceramic artwork by Josje Smit is situated in a prominent place in the hall: directly opposite the entrance of the building.

The Cultural Heritage Agency of the Netherlands (RCE) has established that both art and architecture from the post-war reconstruction period have come under pressure in recent decades. This prompted the RCE to start a study into the architecture and art of this period and to map them out. The result: almost 200 new national monuments and 30 areas of national importance for the period 1940-1965.

For an extensive context, see: Burkom, Frans, Yteke Spoelstra and Simone Vermaat (eds.), Art of the post-war reconstruction of the Netherlands 1940-1965, Rotterdam 2013

We would like to thank our client, Reinder Lanjouw, for the opportunity to work on this project and for his helpfull interview at the start of the project. Also we wanna thank art historian and archaeologist Janneke Escher specially for being involved, providing us with valuable information on Josje Smit, the technical aspects of the work and also for speeching at the re-opening. Next we wanna thank all the people involved who helped us with gathering informationn and thinking along: Head of facility services University Library - Robin van Schijndel; Deputy librarian University Library - Bert Zeeman; Planning and Events University Library - Roos Breeuwer; Management and Conservation Allard Pierson - Bettine Verkuijlen; Collection Specialist Allard Pierson - Esther Boeles; Founder Stichting de Kandelaar – Ton Werner Spruit; Arthistorian - Yteke Spoelstra. Finally we wanna thank our supervisors and examiners Sanneke Stigter and Madelon Simons for providing this inspiring course.